5 Best Practices For Styling Your React Application To Look Professional

Styling a React application can be challenging, but it doesn't have to be! In this article, we'll take you through the best practices for styling your React application to look professional. By following these simple tips, you'll be able to put your best foot forward and make a great impression. 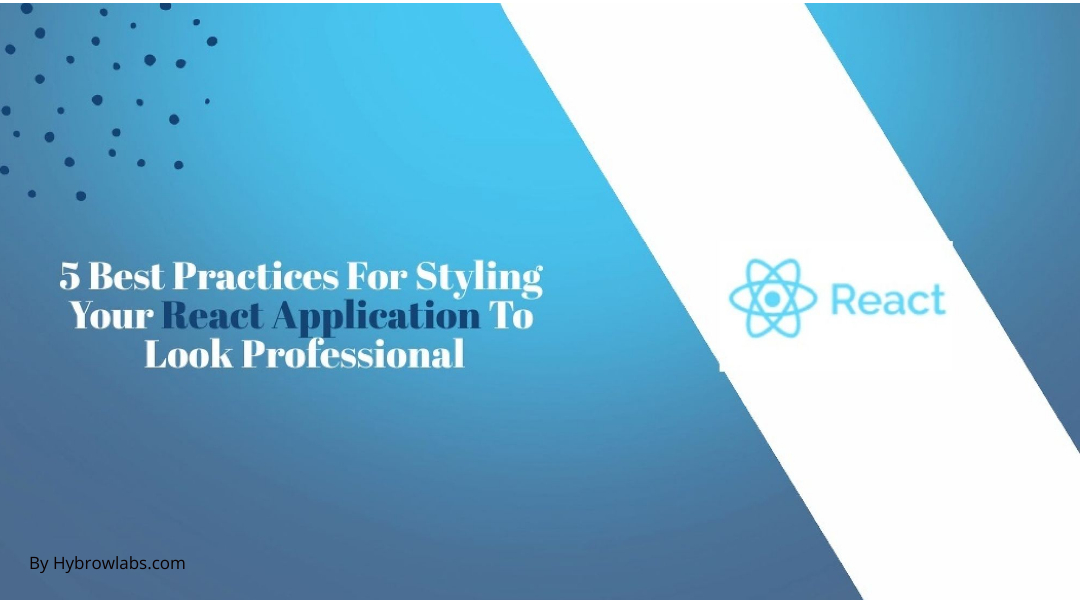 What is inline CSS in React?

Inline CSS in React is a way to apply styles to individual elements without creating a separate style sheet. This allows developers to add and modify styles directly in the code, without having to search through an external style sheet. Inline CSS is an ideal way to style React applications since it ensures consistency across the application, and makes the code easier to read and debug.

When to use inline CSS in React?

Inline CSS may not be the best way to style your application, but it is sure handy! While external styling sheets may be the preferred method, there are certain situations where inline CSS can be very useful. Inline CSS allows developers to apply specific styles to individual elements, providing more control and customization. This can be especially helpful when dealing with one-off components or elements with complex styling needs. When considering the best approach for styling a React application, inline CSS should always be kept in mind.

What do you mean by normal CSS styling in React?

Normal CSS styling in React refers to the use of traditional Cascading Style Sheets (CSS) within the React framework to provide styling for a React application. This approach allows developers to create a variety of different styling options with the same React codebase, as well as allowing for the use of existing CSS libraries and frameworks. Additionally, normal CSS styling can be used in combination with React components and other features, allowing developers to create a highly customized and powerful user experience.

When using normal styling in React applications, conflicts with the CSS can arise due to the component-based structure of React. To avoid these conflicts, developers should use CSS modules, which assign class names to each component and keeps the styles isolated from other components. By doing this, developers can take advantage of the component-based structure of React while still being able to use normal styling.

Should I never use React styling then?

The answer to this question is no. Normal React styling is needed in certain scenarios. Normal CSS should still be used when global styling is necessary, such as adding fonts or other assets to the entire site. Using both normal CSS and styled components will ensure that your React application has consistent and optimized styling.

CSS modules are a powerful tool for implementing modular and reusable CSS in a React application. By using CSS modules, developers are able to write their own reusable stylesheets and apply them to components in their applications. This makes it easier to maintain consistency throughout the application and enables developers to quickly make changes to the styling of an entire application without having to rewrite all of the code. CSS modules are becoming increasingly popular amongst React developers, as they provide an easy way to keep styling organized and consistent across an application.

When you should consider using CSS modules:

CSS Modules are a great option for developers who already have existing style sheets written in CSS and want to reuse them. This is especially useful when buying HTML templates from other sources, as it allows developers to quickly incorporate their styling into their React application. CSS Modules allow developers to easily import and export components while keeping the styling local and reusable. This makes it much easier and faster to create a cohesive look and feel across the entire React application.

CSS in JS libraries in React

The use of CSS in JS libraries has become increasingly popular for React applications. These libraries make it easier to style components and manage styles across multiple components. Popular libraries such as Styled Components and Emotion allow for a more efficient styling process, resulting in a more consistent design language. With the help of these libraries, developers can create React applications with a professional and unified look and feel.

Some popular CSS in JS libraries in React

We will be doing an end-to-end review of the CSS in JS libs in another article.

It would be good to know a little bit about Style Components:

Styled Components is quickly becoming the most popular CSS-in-JS library for styling React applications. It's a lightweight and powerful way to style your app without having to write CSS.

With Styled Components, you can easily create dynamic and reusable components with a simple and intuitive syntax. It also allows you to write styles that are scoped to a single component, meaning you don't have to worry about global styles clashing with each other. If you're looking to style your React app, Styled Components is a perfect choice.

Styled components are a CSS-in-JS tool that bridges the gap between components and styling, offering numerous features to get you up and running in styling components in a functional and reusable way. In this article, you’ll learn the basics of styled components and how to properly apply them to your React applications.

Sass SCSS is a popular style sheet language for styling React applications. It is easy to learn and provides a wide variety of features and capabilities to aid in the styling of React components.

Sass SCSS helps to keep code organized and maintainable, as well as providing the ability to create reusable code snippets which can be used throughout an application. It also helps to speed up development time, as often complex styling can be set up quickly and easily.

The use of SCSS for styling React applications has been popular for some time but has recently been superseded by CSS in the JS approach. If you are looking to leverage existing CSS, however, then SCSS may be the better option. It is a good idea to look into both options and decide which one is the best fit for your application.

Example of SCSS in React JS

These are some of the best practices for styling your React application to look professional. With these tips in mind, you should be able to create stylish applications that stand out from the crowd.