Ethereum Cheat Sheet: Everything You Need To Know

Ethereum is a decentralized platform that runs smart contracts: applications that run exactly as programmed without any possibility of fraud or third-party interference. This Ethereum Cheat Sheet will help you get started with understanding and using Ethereum. It covers the most essential topics, including what Ethereum is, how it works, and how to get started using it. 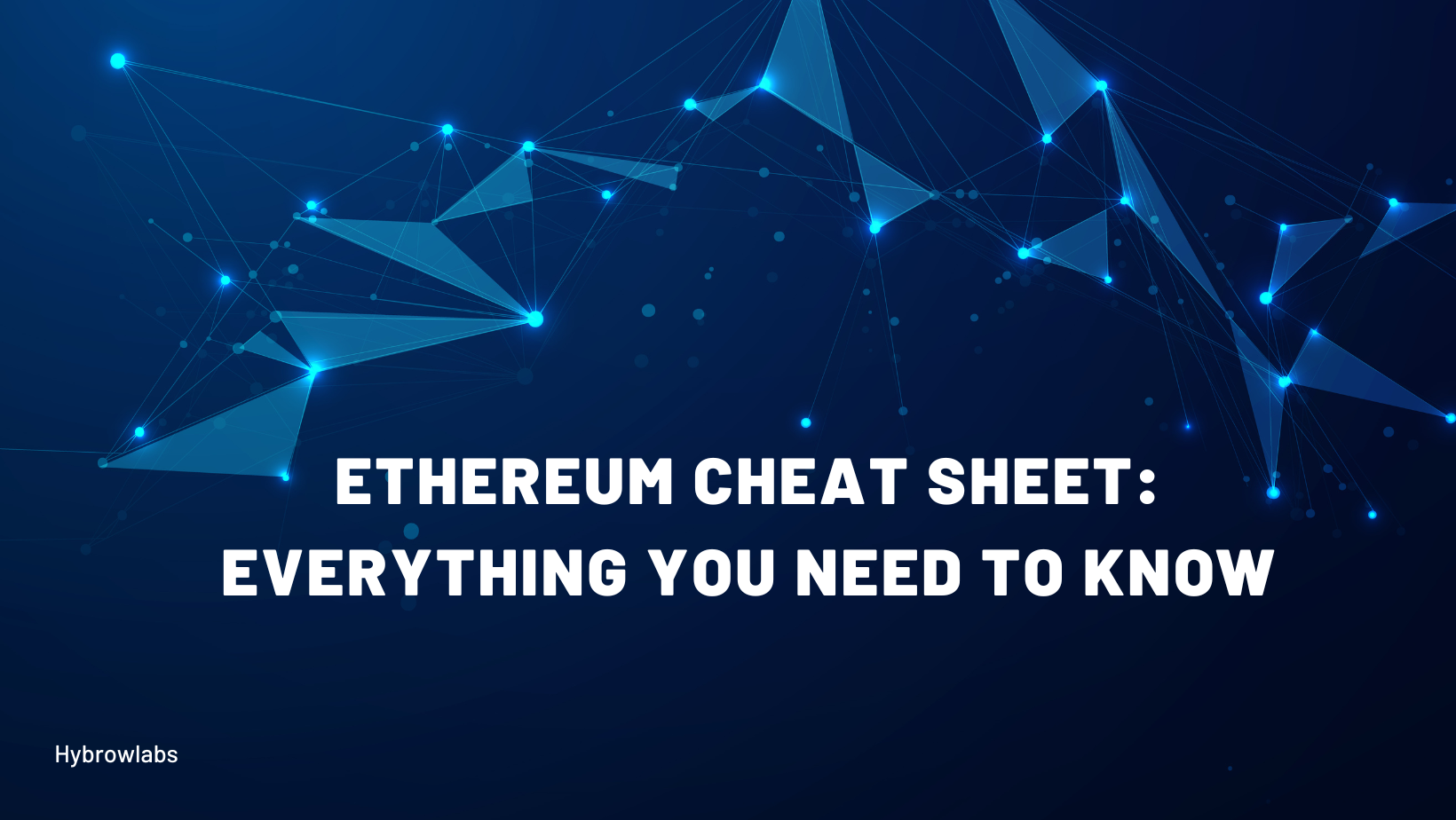 Ethereum is a ground-breaking technical platform that aspires to revolutionise the way we see and perceive the virtual world. Our experience of financial transactions, data storage, and contracting will be profoundly altered if this technology is fully realized.

Statistics indicate that Ethereum is processed on average around 1.2 million times per day.

In this cheat sheet, we'll give you a brief overview of Ethereum's functions and features, so you'll be able to understand how this technological approach can completely transform the virtual world we live in.

Ethereum is a Blockchain-based open software algorithm which can allow the top Ethereum developers to build as well implement various decentralised technological softwares. Solidity is a certain type of cryptocurrency that is already equipped with its own unique programming algorithm(Turing complete). Ether is Ethereum's money, and it functions as the "gas" that fuels smart virtual contracts.

Furthermore, Ethereum follows the same principles as Bitcoin. Although it is majorly based on blockchain technology, you should know about a few minor differences before proceeding.

Because Ethereum coins don't require proof-work, the creation process is much faster than Bitcoin. The process of creating a new block occurs every 12-13 seconds, while the transaction procedure between accounts takes around 16-18 seconds. In this scenario, security is ensured by using a Merkle tree to connect blocks.

Ethereum has several aspects that distinguish it from other cryptocurrencies. These are some of them:

If we properly monitor the structure of Ethereum, the core mechanism is based on a code similar to that of Bitcoin. This implies that it can run any program you might make.

The main transaction procedure entails the implementation of smart virtual contracts, which is pretty similar to any fugitible objects. These might include currencies, special certificates, loyal points, or something entirely different. The primary aspects of tokens have been utilised to incorporate the flow of cash in various Blockchain initiatives through ICOs. ICO basically stands for Initial Coin Offerings.

Smart contracts are developed using Ethereum's unique programming algorithm, which is turing complete. These are tools that allow you to form a certain type of virtual contract among the individuals. Moreover, this transacting procedure can be carried out without having to worry about any inference from third-parties, while also avoiding the risk of any downtime.

We have included a few ideas below which might help you understand two things: the advantages of utilising Etherum and why organisations should consider using it. So, let's get this party started:

The decentralised approach of Ethereum better distributes knowledge and trust among various participants of the network, removing the need for a central body to run the algorithm, while also taking care of the transactions.

Organizations can create and manage private blockchain networks by implementing any SaaS software program such as Hyperledger Besu, in addition to building a blockchain-oriented algorithm from the ground up.

Ethereum is also equipped with an open source ConsenSys Quorum protocol layer. This allows enterprises to develop through public as well as private networks of ethereum. This helps in ensuring that their solution meets all rules and regulations, as well as the requirements of security.

The Size of the Network

It is quite evident that having any type of network with millions of nodes can be able to optimally function. Various companies, who compete over the dominance of their BlockChain technology tend to run the nodes having fewer than 15 or 20 nodes. This implies that they have no precedent for a larger and a more successful network. Therefore, for the corporations, which are bound by the limitations of the numbers of nodes, the network becomes quite crucial.

Thanks to Proof of Authority consensus and bespoke block time and gas limits, consortium networks created on the Ethereum platform can outperform public networks and reach thousands of transactions per second. Due to the fact that smart contracts operate instantly and transactions can be completed within a few seconds, Ethereum's scalability will always be one of its strongest features.

The consensus method of a blockchain can be able to ensure that the record for the transactions can be tamper proof and canonical. For varied enterprise network cases, the technology of Ethereum offers customisable consensus techniques, such as RAFT and IBFT. It helps in assuring optimal finality of these transactions while also lowering the desired mechanism, which is the primary required for the Proof of Algorithm approach.

The economic aspects for the cryptocurrency of Ethereum enable various networks of enterprises to build rules that punish malicious behaviour while also rewarding actions like viability and availability.

Now that we have a brief idea about the advantages of ethereum, let's go over some of its disadvantages:-

Ethereum's decentralised technological approach had one major issue. Although it was designed to optimally function as a decentralised network. However, a minor portion of its nodes are controlled by centralised parties, posing severe security risks.

Because Ethereum is such a new technology, it has been subjected to a number of hacking attempts or various other malicious activities.

As we know, Ethereum is still a relatively new concept which has no prominent track record. Hence, various individuals have a hard time involving their trust in this mechanism.

If we take ethereum's transactions speed, you might know that it has a relatively low Transition speed. Since it is designed differently from the other BlockChain alternatives, it is in direct competition with them.

Some Major Applications of Ethereum

Several corporations, who are looking forward to gathering funds through an ICO or initial coin offering, have fully utilised the advantages of Ethereum. It's also used by a lot of businesses to create their own tokens.

In simple words, the entire production process of various digital coins and also can be easily moved among numerous parties.

As an example, you might imagine the currency being delivered effortlessly by email or text from one individual's DM to another. The following are some of Ethereum's applications:

Another excellent example is the firm Blockchain Capital. They established a certain token of security on Ethereum to symbolise the ownership of a party's funds, while also making it much easier to invest their funds for other motives. This is one of the advantages of its liquidity.

Ethereum has been used by a number of well-known companies, including Samsung Microsoft and IBM, to create decentralised apps by utilising smart virtual contracts that may be used in a variety of industries.

The blockchain of Ethereum makes it possible to create decentralised tokens as well as secure virtual identities. To put it another way, it would let individuals generate their own unique ID that would be linked to a certain Ethereum address. Companies that require KYC when clients wish to access certain services for a particular platform or gain tokens during an ICO sale.

Sovrin is a certain type of application software that runs on the Ethereum network. It provides you with a self-contained virtual identity which you can manage and also utilise through various platforms or applications. To put it simply, it is not bound to a single service.

You might have heard of Crypto Kitties, which has gained quite a popularity in recent years, and is built on Ethereum. This falls in a unique genre of games in which you are allowed to buy, gather, as well as virtual characters and cats. And this is quite similar to the game of Pokemon.

However, the major difference comes into play, while transactions are taking place. Every transaction you make with various in-game players is recorded on a blockchain. This allows for immediate transfer of the ownership and ensures that no one may take your cat away.

Given the above example, if you're considering a similar type of Ethereum-based application software, try to get in touch with a top-tier Blockchain development firm. They can be able to assist you in creating an innovative application and will provide you with brilliant solutions regarding the development procedures of a typical Ethereum oriented application.

Ethereum is currently thought of as a very crucial part of our internet's future. And it will undoubtedly revolutionise our lives in the next few years as people use it to exchange money, conduct business, and buy/sell anything virtually among the network of parties without the need for a third party. It's a fantastic idea that has already begun to alter our everyday routines.

The Ethereum blockchain is now in a phase known as Metropolis. The most important aspect of this version is that it improves Ethereum's overall usability, privacy, and security. For example, instead of having many independent wallets, crypto enthusiasts can be able to create many accounts so that they can have various types of transactions from their wallet.

Apart from that, the technology of Ethereum is trying to bring a transition from the Proof of Work software algorithm set by Bitcoin towards the Proof of Stake software algorithm. Furthermore, validators might replace miners in the latter. Consequently, it could be much more scalable since it is less dependent on mining activity.

Ethereum is a bright and exciting new technology that has the potential to transform many aspects of our digital world. It has drawn the attention of developers all around the world, as well as corporations like Microsoft, UBS, and Intel, because of its unique characteristics.

Blockchain technology, which is very similar to the structure of a traditional ledger, is used by most cryptocurrencies (i.e., records stored on top of one another). Ether differs from other cryptocurrencies because it functions as a fuel for the Ethereum system.