Everything You Need to Know About (DAOs) Decentralized Autonomous Organizations

Here at our blog, we aim to educate our readers on everything they need to know about DAOs. Whether you're a total beginner or you already have some familiarity with the concept, we've got all the information you could ever need, all in one place. 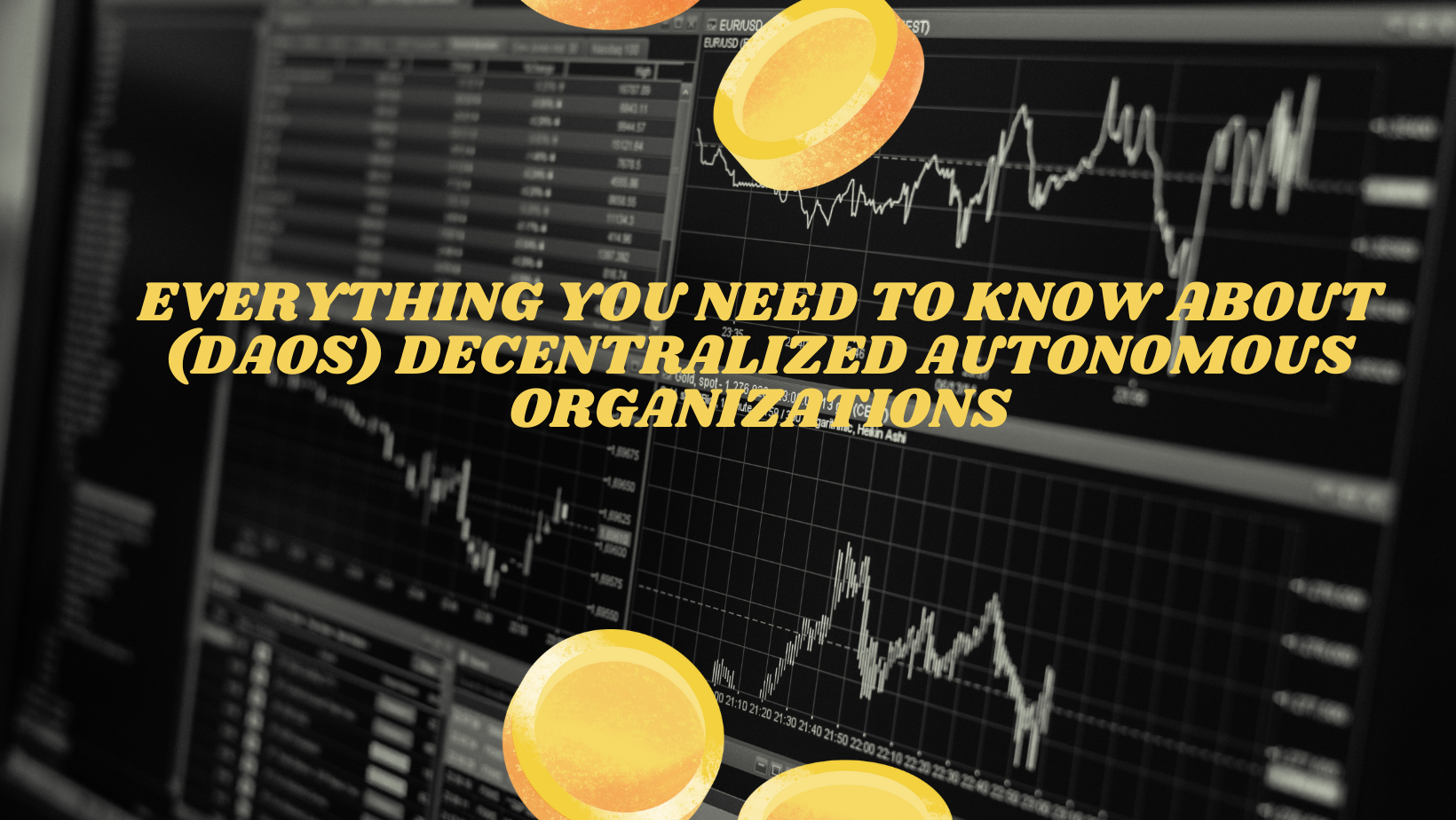 According to Wikipedia, a DAO (Decentralized Autonomous Organization) is an organization whose laws are recorded in a transparent computer programme and is managed by its members rather than influenced by a central administration. No managers are required because the rules are built in the code, removing any bureaucracy or hierarchy barriers.

Some of today's internet users, as well as future generations, are eager to form social organizations in order to find an answer to the question, "How can we exchange values in a trusted environment?" Even while blockchain enables automated trusted transactions and value exchanges, Ethereum claims that internet users all over the world desire to organize themselves in a "safe and effective way to cooperate with like-minded persons, all over the world."

Bitcoin is widely regarded as the first fully operating DAO because it has programmed rules, operates independently and is managed consensually. Of course, not every DAO has achieved the same level of success as Bitcoin.

However, the spike in fresh interest in DAOs has resulted from the development of Decentralized Finance (DeFi) in 2020. Having gained a deeper understanding of DAOs, it's time to learn more about their history and characteristics to see the bigger picture of how traditional forms of organization are being challenged.

With the widespread adoption of blockchain technology, a new type of business or organization has emerged. A decentralized autonomous organization, or DAO, is a firm administered decentralized by smart contracts on the blockchain. The fundamental idea behind DAOs is to let a broad group of contributors participate in the governance and development of the project.

DAOs function as a result of a combination of smart contracts that allow individuals to participate equally in decision-making processes within the business. How the company will use financing and resources is one of the decisions made by the community of stakeholders. In order for the organization's plans and policies to be accepted, a certain percentage of the community must agree.

This is accomplished using a decentralized, distributed blockchain, with each DAO determining the required percentage for a decision to pass.

A smart contract determines the firmness of a DAO. The smart contract holds the Organization's storage and symbolizes the organization's regulations. Because DAOs are transparent and public, no one can change the rules without others noticing. Although we are accustomed to organizations with legal status, a DAO can function very well without it because it can be constituted as a general partnership.

A typical DAO has a kind of democratic structure, compared to some of the general corporations. Any modifications to a DAO must be voted on by all members, rather than being enacted by a single party (depending on the company's structure).

Most of the DAO funding comes from crowdsourcing, which is token based.

Normally, a DAO is controlled by a community of people. This is unlike the case in transitional firms, where they are controlled by a board of directors, special executives, and also active investors.

General corporations tend to work only with the organizations and try to keep things private. In comparison, the operation for DAOs is mostly transparent, and the information on the operations is globally available.

Unlike traditional companies, DAOs' operations are transparent and global, and only they know what is happening.

How Does a DAO Function?

To be fully functioning, DAOs require the following components: A set of rules under which the organization will operate, as well as funding in the form of tokens that the organization can use to reward members for particular acts and to grant voting rights for creating the operating rules. Also, and perhaps most importantly, is a well-designed and secure framework that allows each investor to customize the company.

One potential issue with the voting mechanism is that even if a security flaw is discovered in its initial coding, it cannot be fixed unless the majority agrees. Hackers can take advantage of a flaw in the code while the voting process is in progress.

Working Procedure of the DAOs

DAOs can easily function on the BlockChain mechanism available in the market. However, because of Ethereum's popularity, most of the DAOs are Ethereum based. Unlike any general corporation, the DAOs normally function through smart contracts, that are programmed to function on their own with little involvement in the manual bureaucracies.

The smart contracts will autonomously take action under certain commands, provided that it got affirmative confirmations from its major shareholders.

Smart contracts are blockchain-based computer programs that automatically execute or run commands when certain circumstances are satisfied. Because there is usually no middleman involved in the instruction's execution, this enhances assurance of outcomes. Members of a DAO will have entire confidence that when trigger conditions arise, the DAO program will do the activities that have been pre-programmed.

It goes without saying that a computer program executing pre-programmed instructions will increase transparency in organizational decision-making. This also lowers the friction and red tape that might occur in a conventional organizational structure, where actors who are not affiliated with the organization's members (e.g., management, staff, or a board of directors) must be entrusted with carrying out the members' wishes.

Those third-party actors may not have the same view on what actions to take as the organization's members or how to take those actions. Where there will diverge from the members, they can be forced to act, usually by relying on cumbersome governance processes, such as a shareholder vote in an annual meeting.

4. No need For Manual Decision Making

DAOs solve this problem. In the case of a DAO, most of the decisions have no requirement of any manual affirmation, as they generally revolve around a computer code and execute the command.

A DAO, for example, can be designed to purchase or sell stocks in response to market conditions. There is no need for stock traders or managerial choices. It is straightforward and easy to access the DAO by logging on to a computer and voting on the next step to take, where judgments are subject to the instructions of members. This procedure is also incredibly frictionless: computer-based voting can take place within a predetermined window, which can be as long or short as specified in the computer program code; once the vote has taken place, the DAO can take action immediately.

5. Solving the Agency Problem For DAOs

There are various tactics that can be used today to give DAOs actual world agency, regardless of whether they can benefit from legal personhood. However, all of these solutions are currently flawed and require the return of components of traditional corporate or partnership governance.

The solution to the agency problem entails the creation of new legal companies to act as go-betweens between the DAO and the actual world. These middlemen can assume a range of legal forms and be based in a variety of jurisdictions, with the decision-based in part on tax and bankruptcy issues.

The Foundation Company's decision-making abilities can be limited to limit the governance rights that are transferred from the DAO's members, although this would plainly require the DAO to relinquish some authority.

The additional mechanisms needed to provide a DAO real-world effect can be a complex web, and the above is a very simplified perspective of how real-world agency can be communicated. This goes against one of the DAO's key goals, which is to make organizational decision-making easier. Furthermore, the directors or management of the legal entity chosen to function on behalf of the DAO in the real world may have conflicting duties to that business.

How DAOs are being Used In The Current Scenario?

DAOs have been utilized for a variety of reasons thus far, including investment, charity, fundraising, borrowing, and buying NFTs, all without the involvement of intermediaries. So that you may get a better picture, a DAO, for example, can receive donations from anyone in the world, and its members can select how the money is spent.

Can you imagine being a co-owner of a song written by an artist simply by using cryptocurrency on an internet-based platform? Jenny DAO obtained its first NFT, an original song by Steve Aoki and 3LAU, in May 2021.

This DAO is a metaverse organization that allows users to own NFTs in fractions. The purchase of NFTs will be overseen by its members, and the protocol's smart contracts will manage the vault where these NFTs will be added.

DAOs are currently stuck in limbo, with evident governance benefits but severe limits due to their lack of legal personhood. As DAOs mature as a legal construct, additional regulation is expected to follow, as they become more acknowledged as a conventional organizational structure and regulated as such - for example, by treating DAO tokens as securities.

Although the administrative burden associated with this may be onerous, it would be more than compensated if DAOs could then enjoy the benefits of legal personhood, allowing them to own property and enter into contracts without the need for the complicated legal maneuverings required to grant them legal personhood.

Because this is a relatively recent occurrence in the business world, the concept of decentralized autonomous companies is currently being developed. DAOs cannot manufacture products, generate programming, or build hardware, which is a critical distinction to make. DAOs, on the other hand, can simply hire contractors to fulfill all of these functions once a hiring contract has been authorized by the community.