Are you wondering if you should choose Flutter or React Native for your next mobile app development project? Both are popular choices, but which one is right for you? This article will compare the two options and help you make a decision for your next project. 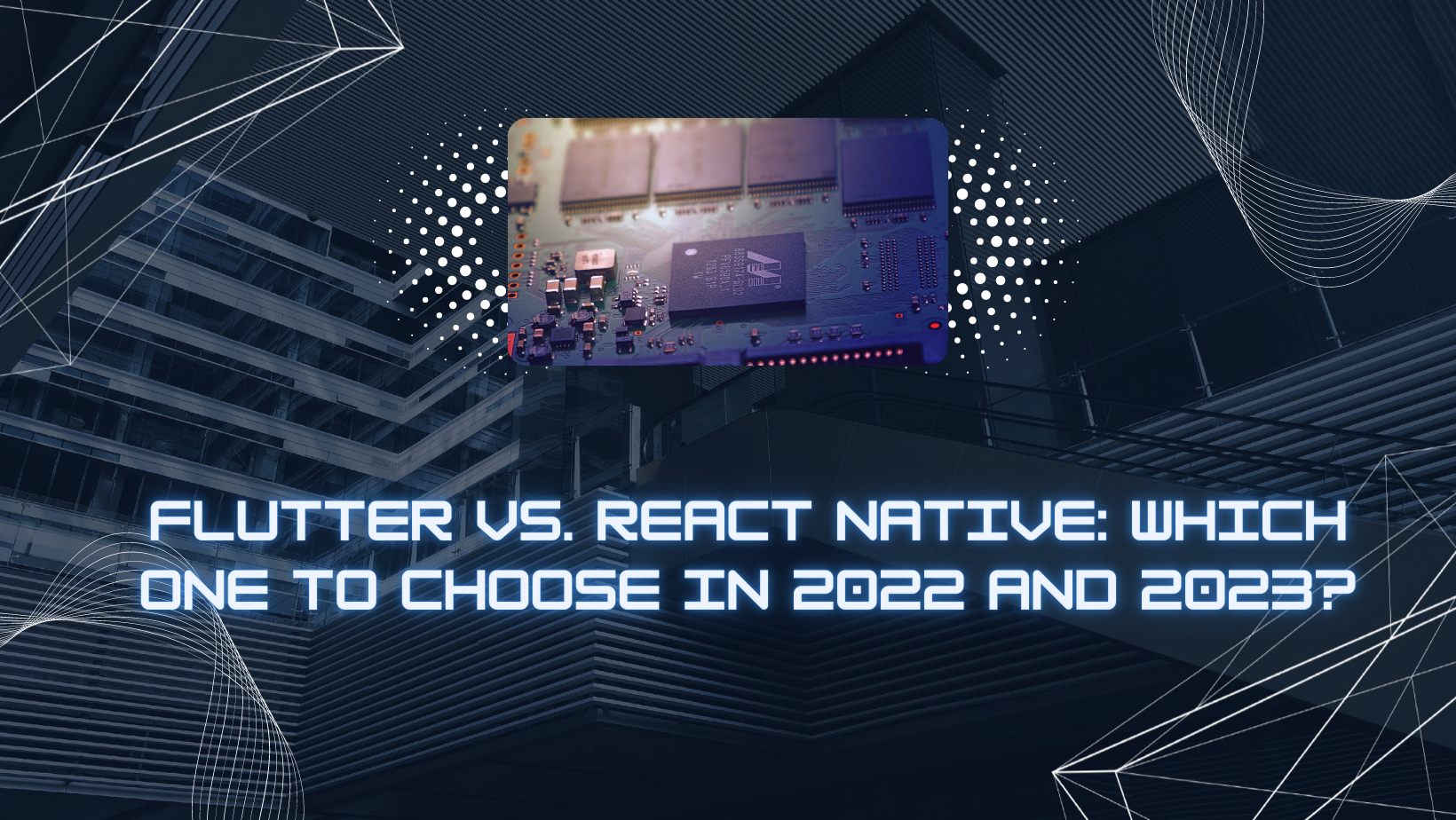 Cross-platform app development is becoming increasingly important to the most successful companies in every sector as they aim to broaden their customer base and improve their overall experience. Utilizing a variety of app development tactics and technologies is usually a top priority for companies that have their sights set on becoming industry leaders.

The choice of technology becomes even more crucial when it comes to developing applications that work across several platforms. Out of all the platforms that are now accessible, Flutter and React Native continue to be the most extensively utilized and popular options.

In this article, we will talk about the roles that these technologies play in assisting developers in the process of creating innovative online and mobile applications.

To assist you in understanding the complexities involved in employing any of them for your future business app, we will compare the performance of the two frameworks, Flutter and React Native.

Google's Flutter is a relatively new open-source UI development framework kit compared to Facebook's React Native. Flutter was developed by Google. It makes use of Dart as its core language for the construction of the user interface components. And also it utilizes a single codebase that is compatible with Android, iOS, Linux, macOS, Windows, Google Fuchsia, and other platforms.

Flutter receives regular upgrades that strengthen its functionality as a platform for the creation of mobile applications. Reliable support for JavaScript developers to readily learn Dart has been included in recent revisions to the Flutter 3.0 framework.

What are some of the benefits of using Flutter?

While developing solutions for our customers, we have come across several benefits associated with the use of Flutter. These include the following:

Flutter gives developers access to an all-encompassing environment for the construction of applications that are compatible with several platforms, such as mobile, web, desktop, and Windows. The elimination of the need for developers to create unique programs for each results in an increase in productivity.

Widgets built with Flutter are noted for their high degree of personal ability, increased flexibility, and capacity for holding a great deal of material. Additionally, these widgets ensure that the development process is standardized across various frameworks while facilitating the development of high-quality applications.

It is a piece of cake for developers to integrate applications developed in Flutter with various platforms since Flutter makes it so easy. For instance, if it is being used for iOS or Android, it functions admirably with Objective C, Swift, and Java-based applications.

By including this capability, Flutter makes it possible for designers and developers to work together more effectively. It enables you to correct errors or make changes in the code while simultaneously seeing the effects of such changes. In addition to this, it occurs in real-time without causing the program's state to be lost.

The amount of time needed to build an app is cut down significantly thanks to faster code compilation and quicker app evaluations. Iterating over a single code base speeds up both the development process and, as a result, the deployment of the final product. Because there is no need to hire more programmers to work on the code, the expenses may also be reduced significantly.

A Skia engine is used by Flutter. This engine converts the Dart code straight into the native code. On the one side, it helps unify the appearance and feel of the app across all platforms, as well as helps increase app performance in a manner that is very similar to the experience of using a native app.

What are some of the drawbacks of using Flutter?

When preparing to construct commercial apps, it is important to keep in mind that Flutter has certain restrictions and obstacles, which developers need to take into consideration. Among them are:

Flutter is well-known for its rapid compilation and straightforward installation, but the file size it generates for certain applications may be rather large and challenging to work with. Since of this, end users may have difficulties because they must have sufficient RAM on their handsets to store the file. It is also possible for this to result in a decrease in performance and a slower runtime.

As a result of the fact that the technology is still in its infancy, the design is subject to ongoing revisions and adjustments. The process of keeping track of the project's development might be challenging for the developers. Even though this is not a downside, it is a problem that has to be taken into consideration at all times.

Dart and Java come from historically comparable programming languages. At times it may be difficult to discover resources and answers to challenges written in this language. However, if the new architecture is equipped with the necessary JavaScript functionality, the severity of this issue will be mitigated in the years to come.

React Native was at first introduced as a browser-oriented framework that was designed to give an unsurpassed experience in the production of online apps. Later on, the framework was modified so that it could be used in the construction of mobile apps. It is a user interface development framework that is open-source and caters to the needs of creating cross-platform applications for a wide variety of industries and use cases. The user interface elements are constructed mostly via the usage of the programming language JavaScript.

What are some of the benefits of using React Native?

When it comes to developing mobile and web applications, some of the benefits that our React Native developers have encountered include the following:

Developers of new apps need as much assistance as they can obtain from community forums and other discussion platforms when they are working on building new applications. It helps find solutions to problems faster. There is a significant community of developers working on React Native, and they support and assist one another as needed.

The steepness of the learning curve for developers is lower due to the usage of JavaScript, in comparison to the learning curve for Dart. When the language is already known to them, developers do not find it intimidating to experiment with more sophisticated features and try their hand at developing new functionality. It frees up a significant amount of development time, which would have otherwise been spent becoming familiar with new technology.

The necessity that users engage with the app in a way that is consistent with its natural feel is never out of demand. One capability of React Native is the ability to communicate with native modules seamlessly. It makes it possible to have the same functionality on several platforms, and it ensures that those features are immediately updated whenever the operating system is.

What are some of the drawbacks associated with using React Native?

Even with its excellent user interface and intuitive operation, React Native still has room for development in a few key areas. The following characteristics have proven to be difficult for us:

Although it allows you to leverage native capabilities, React Native is still unable to utilize all of them to their full potential. Additionally, it affects the performance aspects. By introducing the JS engine Hermes, re-architecture helps overcome this constraint over time by making it possible for applications to execute more quickly on older Android devices.

Additionally, React Native may not meet sophisticated design requirements. When it comes to business app development, native app development is the path that most developers go toward when the key needs involve complex interactions and elaborate designs.

It allows you to use a large number of custom modules from the library, but there are still many more that need to be constructed from the ground up. Because of this, the creation of the app takes longer and costs more money. If this is not carefully prepared in advance, it may cause significant delays in the delivery of the goods.

If this is not carefully prepared in advance, it may result in significant delays in the delivery of the goods. Maintaining the app's compatibility with the most current version of React Native and the changes that come along with that version might be challenging at times.

Which mobile app development platform is most suited for your company's specific needs?

Hybrowlabs, which has become well-known in recent years as an app development business specializing in React Native, has also begun dabbling with the Flutter app development platform. In our experience working in this sector, both of these technologies have positives and negatives, as well as benefits that are aligned with our company's requirements.

We have seasoned engineers that are proficient in both React Native and Flutter, and their work on each project is focused on the development of innovative mobile applications.

To decide whether to use Flutter or React Native for your business app, we recommend having both apps reviewed by professionals before making your decision.