Is React Native the Best Choice for your App Development? Why

React Native has become a popular choice for developing mobile applications due to its vast features and cross-platform support. When deciding on a technical framework for their next app development project, many people are considering React Native. 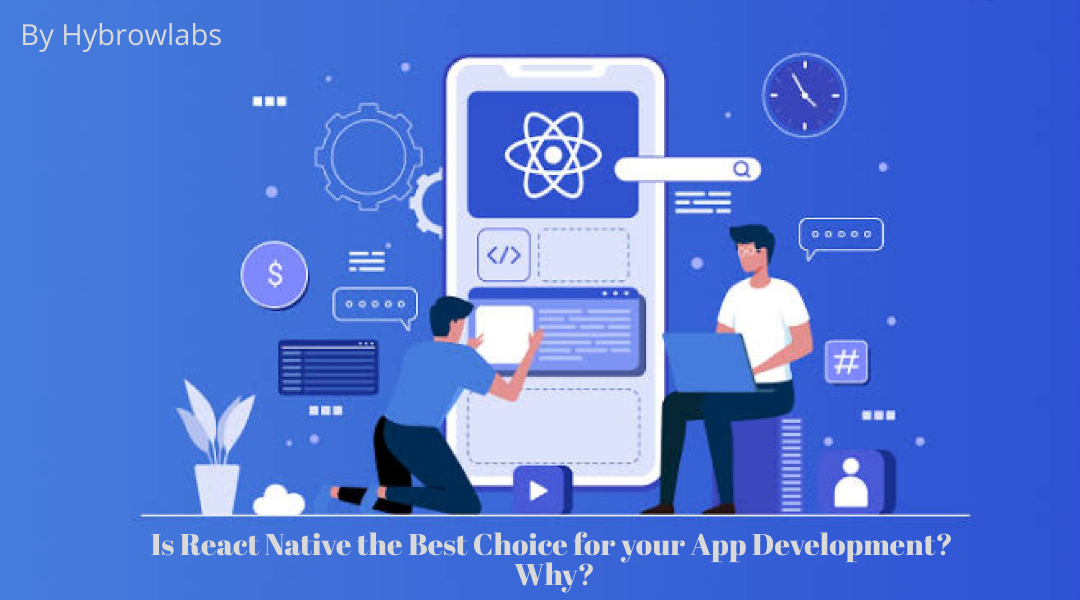 Do people consider React Native for their next app development project? With a vast array of technical aspects that comes along with its features and cross-platform support, React Native has quickly become one of the most popular choices for developing mobile applications.

But is it the best choice for app development?

To answer this, Let us explore the benefits of React Native and discuss why it may be the right option for people working in several other environments. Also, Let us look at some reasons people may find negative while choosing React Native. Read on to learn more about why React Native might be the best choice for any app development.

Why you need to know about React Native?

According to Statista, the mobile app market has already reached $188.9 billion in the year 2020. React Native, a mobile app framework developed by Meta has been gaining ground over time as the best solution for mobile app development. It has been used in several high profile mobile-applications such as Skype, Instagram, Tesla, Walmart, and many more.

So, what is React Native?

In simple terms, React Native is an open-source JavaScript framework helping to create native applications for mobile which include both iOS and Android devices. It was released in 2015 by Facebook’s engineering team. The framework allows any developer to write code in JavaScript and compile it to native apps for different platforms. It combines the power of JavaScript with native user interface components and APIs to create apps with near-native performance.

React Native also gives the right to every development team to use third-party libraries and plugins to help them build faster and more efficient mobile apps. This makes it easier to create feature-rich and complicated apps in much less time than building the same app from scratch. Additionally, React Native makes it easy to keep mobile apps up-to-date. When new features are released, they can be quickly incorporated into an existing React Native app without much difficulty.

In addition to its ease of use, React Native also offers other functional benefits such as improved performance, better debugging capabilities and better customer experience. Some features also include

In conclusion, React Native is an excellent choice for creating mobile applications. It offers developers many advantages such as improved performance, better debugging capabilities, and better customer experience. Its open-source nature also makes it easy for developers to stay up-to-date with the latest trends and technologies. If you are looking to develop a mobile application, consider using React Native as your go-to solution.

The Benefits of React Native

React Native is built on the same codebase as React JS, making it easier to build cross-platform apps that can run on both devices whether it is Android and iOS. This eliminates the need to develop different applications for the same type of platform every time. As a result, this process becomes less time-consuming and helps to manage the cash flow.

React Native apps are faster than native apps developed with Objective-C or Java. That’s because React Native supports the structure of the UI elements natively rather than creating HTML views in a web browser, which can slow down an app’s performance.

As mentioned above, developing with React Native eliminates the need to develop separate apps for different platforms. It also requires less manpower and resources, making it a more cost-effective solution than native app development.

React Native has an intuitive design that makes it easy to use. Developers don’t have to learn the entire platform in order to build a basic app, so it’s a great choice for those who are just starting out in mobile development.

React Native is an open-source platform, meaning developers can freely access its source code, modify it, and submit their changes back to the community. This makes it easy for developers to customise their projects and encourages collaboration between developers from around the world.

Since React Native uses the same codebase for both Android and iOS platforms, developers can easily reuse components between the two platforms. This reduces development time and makes it easier for developers to create complex apps.

React Native is quickly becoming one of the most popular mobile app development technologies out there due to its versatility and ease of use. Whether you’re just starting out in mobile development or looking for a cost-effective way to build a cross-platform app, React Native is definitely worth considering.

The Drawbacks of React Native

Although React Native offers several advantages to every other developer using this technology, there is still a stumbling block that needs to be taken into consideration when deciding if this platform is right for mobile app development.

The first issue that many people working on this technology face is generally the lack of support for some platforms and device configurations. If anybody creates an app for iOS, they will have no problem as React Native works well with Apple’s devices. However, if the same person then opts to work in the same pattern for their Android devices or any other platforms, then they may have to deal with limited options for plugins and features.

Another potential drawback to React Native is its reliance on third-party libraries. Since the library does not include all the features you need, you may have to search for third-party solutions to provide the missing pieces. This could be time-consuming and expensive, depending on the requirements of your project.

React Native also has limited debugging capabilities compared to native platforms. This means that any errors or bugs that you may run into during development can take longer to fix than with a native platform.

Finally, since React Native is a JavaScript-based framework, it can be more difficult to keep up with the changing JavaScript landscape and ensure that your codebase remains compatible. If you’re not actively keeping up with the changes in the language, then your codebase could become outdated quickly and cause issues with compatibility and performance.

Overall, React Native is a powerful framework for mobile app development but it may not be suitable for all projects. Before deciding to use it, consider the benefits and drawbacks carefully to make sure it will meet your needs.

Is React Native The Future Of Mobile App Development?

Is React Native the future of mobile app development? Will it revolutionize the industry and make everyone’s lives easier? Will it be the panacea for all our development woes?

React Native is certainly a powerful tool. It allows developers to build apps quickly, as well as have access to a variety of features that would otherwise take ages to code from scratch. It also provides a great deal of flexibility and scalability, allowing developers to expand upon their existing projects in new and exciting ways.

But before you go rushing off to learn React Native, it’s important to remember that there are some drawbacks. First off, React Native is not the most intuitive language. You’ll need to invest time and energy in order to get the hang of it. Additionally, React Native can be quite difficult to debug, meaning you may have to spend a lot of time chasing down bugs and finding solutions.

The other issue is that React Native is still relatively new. This means that while it has a lot of potentials, it’s not yet mature enough to handle more complicated projects. As such, it may be wise to think twice before relying on it for your next big project.

So is React Native the future of mobile app development? Only time will tell. At the moment, it seems like a promising solution for rapid prototyping, but whether or not it will become a major player in the world of app development is yet to be seen. For now, it’s best to approach React Native with a healthy dose of skepticism and caution.

React Native has quickly become the go-to platform for mobile app development. It has many great benefits, such as allowing developers to write code once and use it across multiple platforms, providing access to third-party libraries and native components, and enabling smooth animations and transitions. It is also cost-effective, as it helps developers save time, money, and resources.

However, React Native has some drawbacks, such as difficulty debugging, instability on certain devices, and lack of specific APIs. Despite these issues, React Native still offers a great range of features and capabilities that make it a powerful and versatile choice for mobile app development.

One way to mitigate these drawbacks is by outsourcing React Native development to a professional team like Hybrowlabs. With years of experience and a dedicated team of experts, Hybrowlabs can help you navigate the complexities of React Native development and deliver high-quality, stable apps that meet your specific needs. Whether you're looking to build a new app from scratch or update an existing one, Hybrowlabs can provide the support and expertise you need to succeed.

In conclusion, React Native is an ideal choice for many mobile app projects, and its popularity continues to grow. Its speed and efficiency are invaluable for creating complex apps in a fraction of the time and cost of other platforms. With its increasing capabilities, there’s no doubt that React Native will be the go-to platform for mobile app development in the near future.